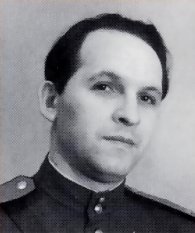 In an interview at the end of his life, Boris Alexandrov described this concert as dominant in the history of the Alexandrov Ensemble (known as the Red Army Choir in the West). Most of the story of this concert is athttp://en.wikipedia.org/wiki/Alexandrov_Ensemble#The_1948_Berlin_Peace_Concert

However Boris was reprimanded for permitting Nikitin to sing in German at this concert, so soon after the war. It has been said by Anatoly Kompaniets that Nikitin was in big trouble, and was shunned by the authorities, but those who knew him say that is not true. He cannot have been more than 30 years old at this 1948 concert, and his recording career ended in about 1952.

He had a naturally beautiful lyric tenor voice, and it is said that the Nazis stopped shooting to listen when Nikitin sang in the trenches during World War 2. Nikitin's voice always sounds only partly trained, and by the time this recording was made, he had taken part in a long and gruelling tour, entertaining the troops in war-torn areas. He sounds courageous, but his voice is clearly tired. Probably World War 2 cut short his chance to enter Moscow Conservatory or Gnessin music college like the other Ensemble soloists. He may or may not have thought that he was risking his career by singing in German. He sounds moved by a compassion for his audience.

You can hear the huge audience joining in the chorus. He was very popular and did several encores of Kalinka; from that point he was the first to be named Mr Kalinka, and was the first to sing it in the grand manner which became a signature style of the Alexandrov Ensemble.

There is a clip of Nikitin (singing Kalinka) at the 1948 peace concert here:
http://209.85.229.132/search?q=cache:http://www.leonidharitonov.ru/archives/2789
Scroll down to see the video. The clip is at 26.15-26.40. The voiceover refers to Nikitin as "Mr Kalinka". There was such a big crowd that hundreds of people had climbed all over the ruined cathedrals to get close to the concert.

From 1952 there is no public record of him. I have not been able to discover his dates of birth and death (ca.1918-ca.1988??), but he was born in Voronezh, and is thought to have died in his 70s. Melodiya, which continues to sell recordings even of Georgi Vinogradov (shunned from 1951) sells no recordings of Nikitin. It were as if his memory had been lost from public record. I understand that in 1952 he chose to return to the Ensemble choir, and that the authorities continued to respect him, including Stalin who used to wave to him at concerts.

Update: A singer who knew him has identified him in videos of the Ensemble choir up to 1965. His position in 1965 in the full 80-man choir was front row, 7th from left. I understand that it was normal for Ensemble choristers to always keep the same position in the full choir.

If I had to leave this valley
and it's delight and tone
this would be my last journey.
I greet thee a thousand times my quiet valley.

If I die I want to be burried in this valley.
Then people shall sing in the evening's sunset:
"I greet thee my valley for the last time"